Have you ever been in a Casino? Those places that are full of lights and colours, like a town faire, where everything is designed to make you stop and waste time, because the longer you stay, more are the chances that you are going to lose some money. And the idea behind a Casino is to help people part from their money, and they do this by leveraging people's stupidity. 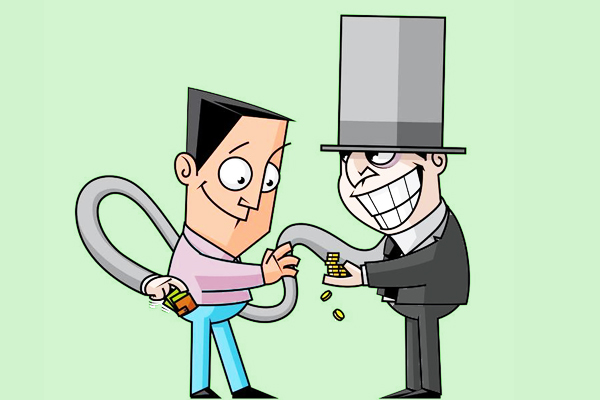 Even peoples that fancy themselves as "extremely intelligent", in reality are quite stupid on many things, sometimes the very things that are supposed to be their field of expertise.

In fact, we could say that the way Casino, and also many, if not all, forms of 'gabling', operates, is nothing shorts than a form of a scam with the clear intent of extract profit from people's stupidity. Now, in some countries (Italy for example), the State is the only one allowed to manage and organize gambling in any shape or form, from regular Lotteries down to betting. Basically the State is scamming its own citizens... for profit.

We could start a very long discussion about this, but normally the "explanation" is that "some people really wants to gamble", and if is not the State, somebody else would fill the gap, maybe in a not-so "clean" way (e.g. criminality), so, better if the State does it. Right? ... Right?

We already saw what happens when some Government decide to try Proibitionism: it doesn't work. The Governement will do what its citizens want. If an enough number of them decide that the Government isn't doing what it's best, the Government will have to change or be changed. Even in places when the Government is the expression of the richest part of the population. Those peoples (the ones wiht the money) aren't stupid, they will sooner or later understand that start a fight with the remaining 99.9% of the population isn't going to do any good to their finances.

So... "leveraging the stupdidity of the population", or to say it better "to indulge their desire to part from their money in any possible way", is a perfectly legal and legitimate activity, at least when the law say it is.

And after this "legal" introduction, we talk about $arewestupidorwhat, a company that was providing several different services, some of which had their own IT system. Nothing incredible, mostly based on a few servers and databases with a dedicated Storage unit.

Now, the problem here was that the storage was quite old and started to report several problems, mostly due to some components that were reaching their end-of-life. $arewe decided to replace the whole thing with a "new" one, yes, the 'New' is in quote because $arewe were very keen in saving money when possible.

Anyhow, the "new" storage was installed and after a very long week-end spent moving stuff from the old to the new, everything seems to work.

And here I need to open a small parenthesis: WHY THE FUCK do we keep up with this bullshit of "after-hour, in-the-middle-of-the-night" ? Anyone really thing that there is less traffic when the sun is on the other side of the planet or X days have pass since the last lunar phase? People! Internet never sleep! It's always 9 am somewhere on the planet and your fucking system is always reachable at any time of day or night (unless you're so stingy to physically turn it off) and the fact that you spend your week-end watching netflix should make you rethink your idea about those kind of "maintenance" done during the week-end. It costs more and is a pain in the ass for whoever has to do it (especially when they are not compensated for the extra-time).
Ok, closed parenthesis.

Things seemed to be more or less ok for a few months, until, one day, a message showed up in my inbox. The message was from the manufacturer of that Storage and announced a mega-update to the firmware of that thing, with a very long list of bugfixes and 'security enanchement'. Hence, I routed the message to $arewe with my suggestion to apply such updates asap.

A few days passes and I heard nothing about it. So I started rattling their cage. After a few shakes, SL of $arewe picked up the phone.

SL - What is the problem?
Me - The problem is that we need to apply those updates to your system and this will probably require a few restart so we'll have to consider some downtime.
SL - ...what if we do not apply the updates?

What immediately jumped at me was that he didn't started discussing times or dates, he went straight for the "not doing"... that was suspicious.

Me - Those are mostly security updates, since lately we are hearing a bit too many times of peoples finding data leaks and the like, I'd say that is better to install them.
SL - Yes but... Do we also need to register the thing with the producer?
Me - I don't know that, but since this is an "industrial" product, having the full support of the manufacturer would be a lot better.

Me - What is the problem in registering the product?
SL - Let's just say we'd like to avoid it.
Me - That could void the warranty. So replacement parts and other things, not just security updates, could be a problem. This is a production system we're talking about. And most of your system is based onto it. Doesn't sound very smart to me.

Sl is silent for a bit..

At this point I started poking some questions and the sad story came out. Well... $weare were very keen in saving money when possible, even when not advisable, so they decided to buy a second-hand storage from a local reseller. Since it wasn't a new one the cost was very low. So low in fact that the shipment was a significant percentage of the total cost.

So, SL & Co decided that the best thing to do was to drive there personally and pick it up themselves. What they did. And then delivered it to us for the installation.

Nothing strange here. But then... The reseller must have make a mess with the paperwork because they notified SL that "since they didn't picked up the machine, the order was canceled and the money partially refunded".

Of course, SL & co decided that a storage that is cheap is good, but one that is almost free is even better. So they said nothing to the idiot and got the refund. But then, since the product was never "received" it couldn't be registered to the manufcaturer...

At this point the whole story degenerated into a ping-poing of responsability, and since this isn't my field, I washed my hand of the whole thing. From my part, SL&co could have gone fuck themselves.

Their point of view was that they didn't "stole" the thing, they simply accepted a refund they technically didn't had rights to. I'm not sure what the reseller point of view could have been on this.

My point of view is that if the other guy is an idiot, that doesn't make you a smart person, just an asshole.

As such, when DB asked my opinion on how to 'solve' the problem, my answer was that they should've first rectified the situation, then register their fucking storage. Because keeping the storage 'in limbo' was just not to be considered.

And a few month after that... Wannacry showed up.

Now, the most attentive readers should have realized that, first of all, there is a delay in the pubblication of new stories, second, many of them tend to repeat the same themes.

For the first thing, I started with some "backlog", but this quickly run out, so now if I don't write anything for a week, I don't publish anything for a week. And lately I don't have much time free for writing, because I'm busy with other things that require my attention. So get used to it because isn't going to improve.

For the second, yes, I realized that too. The problem here is that many things that happens are quite similar because the peoples involved are mostly similar and the "field" in which things happens can't be that large. Having moved from an environment that was mostly user-based to one where is more "manager-based", and they are more looking at the monetary part of the job, the problems I have to deal with have changed to reflect that. I can't do much about it.
This in fact reconnect to the first problem, sometimes I start writing somethng and then I realized is very, very similar to something I've already wrote. So much similar that is practically the same.

Also, lately I tend to muse more on things that more "generic" and less "tales" (see the post related to time and place of work sometimes ago) mostly because those things allow for a large discussion and are not connected to things done directly by me.

What the heck does all this means? That the rythm at which I publish stuff will grow slower and I could say that I'm sorry, but would be to lie.

And with this, we'll see next time, that I have no idea when it will be.