I'm quite sure that everybody knows what is a "check list". If you don't know, and even if you do, a check list is a list of things that needs to be checked or done. Each line (kinda) is one step on a very long procedure and after having checked or done the step, you put a mark on the line and proceed with the next one. 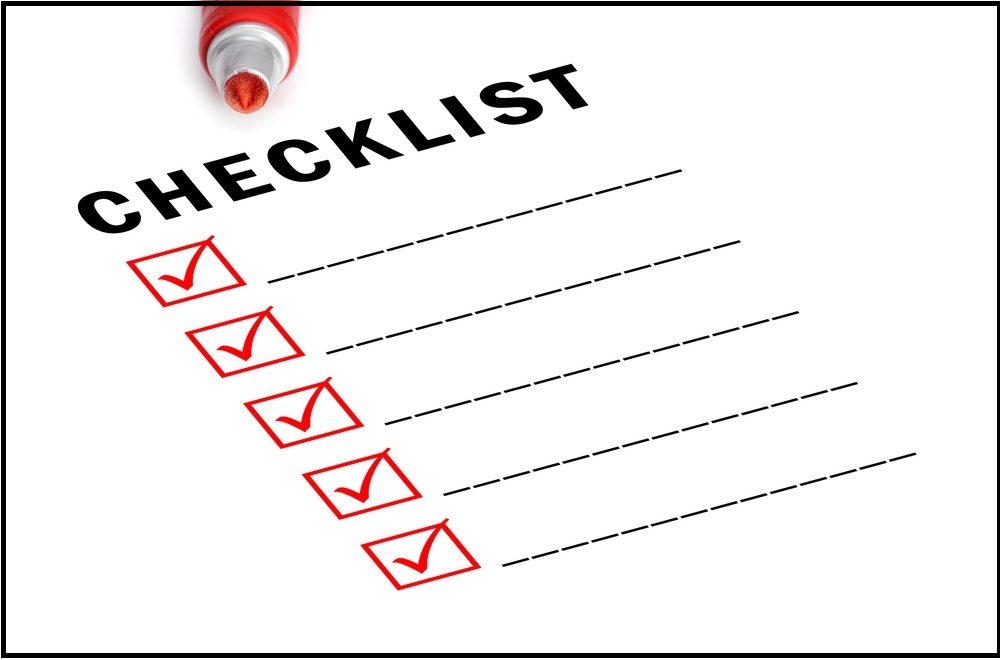 Checklists are useful when you have a long procedure that is going to be chopped into single steps to be sure that none is missed or failed.

It sounds very simple (and it is) but there are even full books written on the argument.

And they are used in many different circumstances. Especially when the process to be performed is important and/or dangerous, like in areonautics. Before each flight, both pilots run through a pre-flight check lists checking things to be sure they don't forget something. We should also do something similar in every day life. For example, what was the last time you checked if all the lights of your car are in working order?

The problem isn't much in the lists, but in the execution. Because to have the lists of checks or steps written down and in order doesn't help if they are not executed. For example if you're ready to leave for a vacation, already in the car and with safety belt strapped on and after looking around you ask "where's the little boy" and the answer is "in the bathroom" and then you simply drive off... maybe that is not what you should do (even if it is what you'd LIKE to do).

And this is true also for other peoples. Years ago there was a big airplane crash, that was caused by a simple mistake: the fuel pumps switch was on the 'off' position instead of the 'on' position. That switch was in the checklist. Both pilots checked it and marked it as 'done', but they didn't turned it on.

And now we're going back to the normal world and we'll talk about documentation, that is not precisely a checklist but it looks a lot like it sometimes.

It happens that there are things to do to have other things working, and this kind of documentation looks a lot like a checklist because is an ordered list of steps to perform. But if the steps are ignored it obviously doesn't work.

And here it comes CL! That shows up lamenting about some stuff that doesn't work.

The "stuff" in specific was some sort of semi-automated procedure that I put together to do... something, and in 90% of the time it does work automatically without supervision, but sometimes, for some people, it fails. And couldn't figure out exactly why, so I wrote some documentation explaining the fix in an easy sequence of steps that every user interested in the thing should be able to follow and fix the problem, without having to ask me or anybody else. That is handy when I am at home trying to sleep while the CL of the moment gets the urge of doing something on a sunday morning for example.

In this case it wasn't sunday (luckily) but it was a normal working day, so CL arrived with the laptop at my table lamenting the misfiring of the thing.

Grab the latop and open the documentation, my "procedure" shows up.

After repeating the question for about 15 minutes, CL finally decide to start powershell.

Me - Good, now step 2: go to D:\Tools\Sync
CL - So I double click on the script...
Me - NO. You go to D:\TOOLS\SYNC!
CL - But...
Me - Listen, if you say that you've read the documentation and you followed it, why the fuck do you want to do something that has nothing to do with that now?
CL - But.. if I double click on the thing there...
Me - If you read the doc it says very clearly that works only in some cases, that is not obviously yours. So why do you want to proceed in a way that will definitively fail?
CL - Ah, no, I was thinking that...
Me - I ask again: did you read the docs?
CL - Yes...
Me - So why aren't you following it?

After some times, we finally followed (for real this time) the procedure as documented and we noticed that, if you do what is in the doc and not something else, it actually does work.

Because checklist and documentation are fantastic when they exists, but if you don't follow them, they are useless!