Is it that difficult?

This is not actually a "tale", is more of a rant, a collection of grievances. Take is as you wish.

We have to talk. To talk about phones. 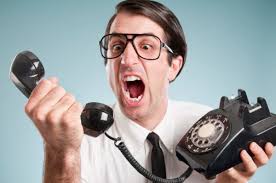 You know? Those things that makes noises all the time, like the neighbour's son, that think he is a great musicians/drummers/trombonists/wathever and is always a huge pain in the .... hears (both: phones and the boy).

In 1875 a scotsman and an italian discovered a way to send sounds into a telegraph line, the italian decided to stop at a nearby cafe' on his way to the patent office and the rest, as they say, is history.

Before the advent of the phone, people was using telegrams, that is a giant pain in the ass to use. First you need to go to a specific office, and dictate your message to a guy, then you need to PAY! And the longer the message the more you pay, so people was trying to be super-concise and to send telegrams only if it was really required.

With the phone is a different thing. And people discovered they could babble for hours without actually saying anything. The result is again history. As in HIS Story...

Today... we are going backwards.

But if we check, it seems nobody uses the actual "phone" unless they are forced to. And when it happens, it's a crysis.

Today, everybody try the "internet" way, a form or an app to "contact", send a message, and then they send a pile of shit that is impossible to read and is in the end dropped because it's impossibile to process.

And when that happens, then they search the way to "contact a human being" Sorry, there aren't any, if you can reach 17000 bauds I can patch you directly into the Matrix...

I remember long time ago, when I got "trained" in the use of the amazing device. My parents owned and operated a restaurant, so it happened that I was the only one "available" to pick up the phone during the day, so my dad gave me the "quick" course:

"First of all, if you ANSWER the phone, first you say WHO THE HECK YOU ARE, then ask who is calling and what he needs. WRITE IT DOWN! That's why there is a notes here and a pencil. And get his number too in case we have to call him back. If you are the one to call, when they pick up you tell them WHO YOU ARE AND WHAT YOU WANT! Be precise but quick. Try to speak without chewing your own tongue and leave the phone number twice, speaking each digit on its own. Clear?"

Since then I used that technique that worked well for me, I've no idea how things are today but it looks to me that the "technique" was lost with the ability to write more than 3 words by hands or do simple math without a calculator.

Today there are several "figures" you can "meet" on the phone.

He is the one that when you answer it starts with

And then hangup. And you have no freaking clue which one of the thousands "Me" it was, what the fuck is "that thing" and what "doesn't work" means. The result is that you ignore the call and after a while you get another one from the same Mr. Me that wants to know why we haven't done shit.

What I do normally is to ask "which who did you spoke before?". And that stalls them better than a truckload of quick cement.

The there is the confused one. This one can be male or female, age varies between 30 and 50 I think, is the one that starts with

And he goes on like this for at least 25 minutes before he finally tell you the name of his shitty company, and usually it turns out that they have moved to another hosting a couple of months before or they have 2 hostings and this involve the other one.

And then there is HER. That sometimes is an HE, but in 90% of the cases it's an her. Age between 45 and 60 I think, so not very joung anymore but still can't be that senile (I hope, since I'm in that range too). The one that, ignoring what you just said, try to "guess" who's at the phone. Yes, even if you just told her.

Sometimes, after a dozen or so names she decide that she punched the wrong number.

The there is the Man That Doesn't Need To Ask. Always MEN. Age between 35 and 45 I tink. The ones that it looks they are always chewing something while they speak. The ones that can rattle down a 28 digit serial number in a quarter of a second, that you wants to ask how many time did they tried before if they can do it without having to breath in the middle.

He - I am shulshulfuamopzublablawe have a problem with the proxy fruafalbulbulzamtolitoli, restart it right away.
Me - Sorry, it was kinda garbled, which proxy and for which company?
He - (exasperated) tuflafaloppaloppaturala.
Me - And which company?
He - (more exasperated) Grubbagrubbamossaloffa
Me - Hmmm.. can't find it with that name, do you have the customer number?
He - Geezyouareslowarentyou? Do you know how much do I pay for this?
Me - Yes, I kinda know, but if I restart the wrong service it wouldn't be good right?
He - fine. The customernumber is totoseveightsiztirtaforeighthundredseventitwelfemillionfortyzerozeroeightthereyago.

Everybody, sooner or later, have to contact the "technical support" for some reason. And all of us should think that the poor asshole that answer the phone is not there to have fun (ok, he SHOULDN'T be there to have fun), and it is OUR interest that he can do his job and solve our problem in the shortest time possible.

Is it that difficult?